Can a 9-hole golf special be worthy of a story?  I think this is a unique golf business story with roots that go back to Stony Plain, Alberta in 1992 – my first year as the GM at a golf course.   While it is now a relatively frequent practice, the idea of sending golfers off the ‘back nine’ first thing in the morning was a very foreign concept more than 25 years ago.  Two primary groups were not happy.

First, golf at ‘full length’ courses was predominantly an 18-hole affair until later in the day.  Early morning golfers who wanted to play in three and a half hours or less felt very cheated that this might no longer be possible (as they may catch up to the Back 9 golfers if playing too quickly).  Second, the turf care departments at a course were being asked to re-think their traditional approach to course set-up in the morning, as they were generally very comfortable knowing they could get ‘out in front’ of the 18-hole golfers on the first hole and complete their required tasks in sequential hole order.

Stony Plain Golf Course was municipally owned, the business of golf in 1992 was relatively flat, and our mandate was to grow revenues.  While I certainly do not believe we were the first course to see this lack of ‘inventory’ use, we were certainly amongst the early adopters.

When I moved to Kelowna Springs in 1995, we immediately instituted the program – much to the dismay of the same two groups I referenced earlier.

Now in its’ 24th straight season at Kelowna Springs, I can share that the program is – by a very large margin – our most successful and loved golf special.  We average between 3,300 and 3,800 Back 9 Breakfast Specials each year.  In the heat of the summer, it can get as high as 40-45 rounds per day with golfers looking to beat the heat, or just get their early morning fix of golf.

Here is what some of our customers have to say:

“We love getting out early on the Back 9.  Beautiful green fairways and greens.  We focus on breakfast by the 17th hole.  It’s great!”

“One of the best deals in the Valley – a friendly course with picturesque views.  That, and the breakfast keeps bringing us back.”

“As a ‘newbie,’ and not an early morning person, it was delightfully good company – good food.’

“Outstanding service in the pro-shop as well as in the restaurant.  Great course, excellent food.  It just does not get any better.  And all of this for just $30.” (Organizer of the group in the picture)

"Kelowna Springs - Back 9 is nice, but the 10th breakfast hole is where the real game and stories start!"

Here are a couple of staggering Back 9 Breakfast Special stats:

With golfing habits perpetually evolving, and with better acceptance of the program, we have fine-tuned the program even more.  Historically, we offered the program for the first 90 minutes of play each day.  In the peak summer when we are starting at 6am, we have stretched this out another tee time or two as the demand for the Back 9 Breakfast Special is frequently greater than the 18-hole demand for the first few tee times each day.  We also have learned that this program has made the early shifts for the restaurant staff much more appealing, as the food and beverage departments at golf courses tend to be quiet until closer to lunch.

Another unique problem that the success of the program created was a high number of twosomes wanting to play on their own.  While we do our best to accommodate this when possible, it simply reduces the supply too much when the demand is high.  To help combat this a few years ago, we introduced significant price discounts if you filled your own foursome.

Today, this means a full group of four golfers saves $5 per person.  We also offer this $5 savings for those going out as a group of two or three in the first 30 minutes each day in the earlier and later parts of the season (when it is a bit cooler and those first starts are less in demand).  New for 2018, we have introduced this $5 savings on Wednesdays between mid-May and late August.  We are not sure why, but this seems the one day of the week when demand is lower. 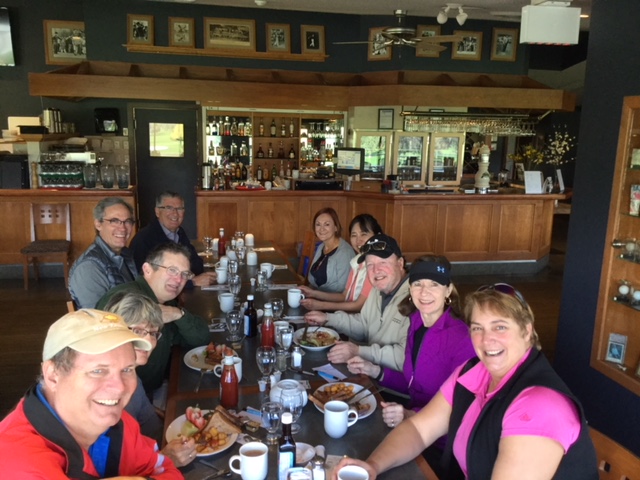 I organize a conference each year for about 70 people and this year we had our Golf Tournament at Kelowna Springs - Everything was first class and all the members liked it so much we re-booked them for next year - Something we have never done before.
Tournament Organizer

We held our third annual golf tournament with about 84 golfers and extra dinner guests in Sept. and it was another great success. Sam in the pro shop helped our group with all the golf course arrangements and Liisa managed the banquet facility. She went all out to make it a really successful evening with a great food selection. We received many compliments from our golfers and guests which will bring us back for another event next year. We definitely recommend this location for golf and or special dinner event.
-Meander492479

We always eat after our round of golf here. They are consistently good at keeping the specials a mix of interesting dishes. Prices are fair and service is good. We have often met others sitting on the patio enjoying the view only to find out they were not golfers but came because of the good food. The view from the patio and the window seats inside all have a super view of the 18th, the small lake and the course.
Reviewed Aug 22, 2018

Thanks to those who created and served such a wonderful meal for 'Date Night' on Friday evening. I had the prime rib and my wife had the seafood crepe, both were delicious. I'll also mention that the spinach and strawberry salad was excellent. We hope 'Date Nights' occur regularly and I'm sure others who were in attendance on Friday will agree.
Ron & Viki Beer